I’ve been slacking again on my writing. I’ve been so busy catching up on house work, my husbands work, real work and making my blog work that I really haven’t had much time to jot everything down.

I’ve tried a few new recipes this week that turned out great. One was a carbonara made out of spaghetti squash and another was a butternut squash hash.

Kale was on special this week. 2 bunches for $3! I couldn’t pass that up even though I was swearing to swear off the kale. Luckily, I found this recipe for the hash which used up one of my bunches. The other bunch of kale remains in my fridge, begging for a brilliant idea to pop in my head. Or show up on my Pintrest feed.

I doubled the recipe but only cooked half and just stored all the cut up veggies in the fridge so I could enjoy this dish the next day. (Honestly, I made the other half for my husband but he didn’t get home early enough so it made a great lunch the next day.) 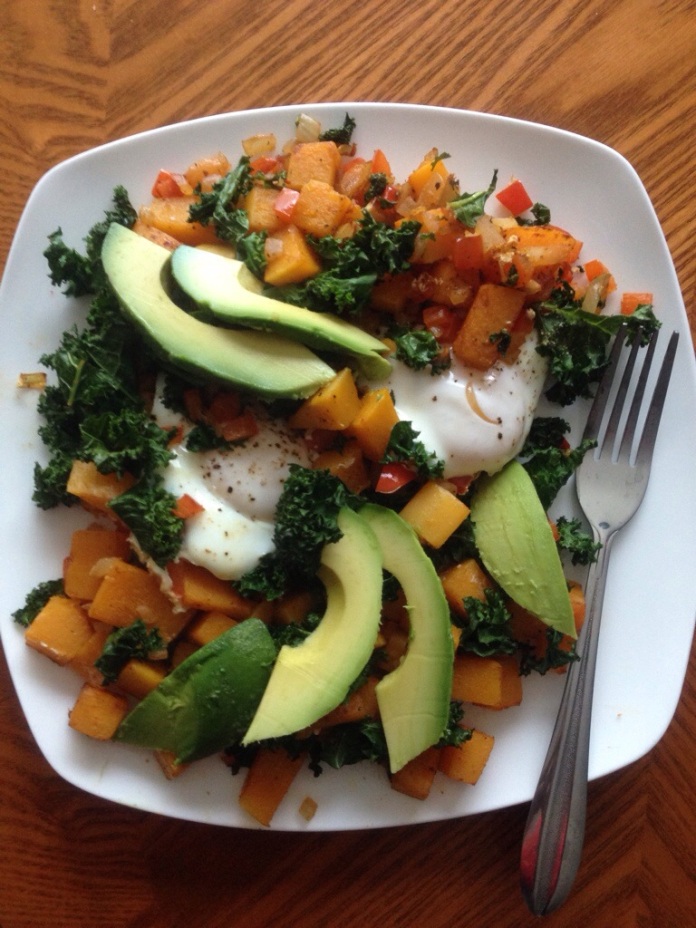 Now my carbonara. I love this dish. It’s a little tricky getting your eggs to not scramble but it’s so creamy and the bacon adds so much flavor.

Now I can hear most of you saying “Bacon?! Bacon can’t be clean, can it?” Well I came close. I found this bacon with no sodium nitrate, sodium nitrite, phosphates or MSG added. The only thing is, it doesn’t last as long as regular bacon.

But I think that’s a good thing. Anything that can last in your fridge for more than a week or on the shelf in the store for years has got to be riddled with nasty chemicals to make it do so. Buy fresh and buy often. That’s my goal for my clean eating challenge.

I also decided to try a stuffed eggplant. This recipe calls for you to cut out the pulp of the eggplant, sauté it up with the other veggies and bake it in the eggplant shells.

Well, the recipe doesn’t tell you HOW to get the pulp out. I scored the eggplant in cubes and ran a long filleting knife around the edge of the skin. Kind of like getting the avocado out of its skin, I used a spoon to pop out the cubed eggplant.

I ended up adding sliced mushrooms to the veggie mixture because I had a couple left. When I looked down in the pan I realized that there was A LOT of filling. I thought there was no way it could get into the shells.

I ended up throwing the shells in the garbage and just tossing the filling in a casserole dish, covered with cheese and baked for 15 minutes covered in foil. I removed he foil and cooked for 10 more minutes to brown the cheese (pepper jack, by the way).

Turns out, the filling would have fit in the eggplant and I would have gotten more eggplant out of the deal. It kind of shrunk in size and I only ended up with, what would have been, a side portion.

It was tasty though. The pepper jack cheese added a spicy element and the whole dish really came together. I highly recommend this vegetarian dish but don’t throw out the shells! It will fit.

I know some of my followers are wondering what I am doing eating cheese, and honestly, I thought I was going to suffer, but it turned out ok! My stomach is apparently ok with just a little cheese, once in a while.

Don’t let the name fool you these are very clean eating.

My maid of honor made these for me for my bridal shower over two years ago and, today, I stumbled upon the recipe she left for me. I twerked her recipe in order to qualify this one as clean. Hope you enjoy!

Melt 3/4 cup dark chocolate chips and 1/2 tbsp coconut oil in a double boiler. Don’t get fancy here, just boil an inch or two of water in a large sauce pan and put a stainless steel bowl on top. Dip large strawberries in the melted chocolate mixture and place on a wax paper lined plate or baking sheet. Refrigerate for at least an hour to set the chocolate. Makes about 10.

I had some chocolate left over so I threw in some blueberries, tossed to coat and put in the fridge along side the strawberries. I can’t wait to dive in.

I have a confession… I haven’t been so good lately with my clean eating.

There were temptations lurking all around my kitchen just begging to be consumed. And I really wanted a steak… or three.

Since starting my clean eating experiment I have cheated in the following ways:

This last week has been the hardest trying to stick with a clean eating plan because we have had family in town visiting and there was a lot of eating outside of my kitchen and only so much I could control.

Also, I think my son is teething and he’s turned into a little psycho, making my nerves a little frayed and little to no time to do elaborate meal planning. I’m surprised (and quite proud) I haven’t hit up McDonald’s yet.

Even though I am down to 127.2 lbs (from 135.6 lbs), I have been feeling a little run down lately and that just goes to show you how much our diet affects our energy stores. I’ve realized that, if I am not careful with what I choose to ingest, it doesn’t just affect me, but my son as well.

I feel like it was easier when I had the meals already planned out for me and so now I am on the hunt for a new clean eating challenge. Perhaps, when you are perusing Pintrest, you could keep an eye out for me for a new one or, if you already have one leave me the link in the comments. Thanks for reading!